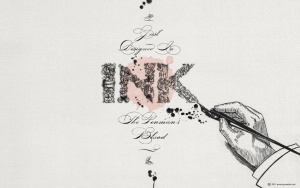 The Penman’s Blood by arnoKath

I have a confession to make. The content of my email inbox, with the exception of pictures of my nephews and the blogs I subscribe to, is uninspiring. My virtual letterbox tends to be filled with bills, receipts and reminders. Emails save time and money, yet still I long for days past. I’d like to cut down on the amount of missives I receive, and replace them with more satisfying ones. I’d choose fewer but longer emails over the perfunctory electronic communication of today in a heartbeat. What a joy it is to pour over rare long emails, the ones filled with delicious titbits of news and sensual descriptions of new experiences, reminiscent of the letters of old. Snail mail is even better. How wonderful to sink into a sofa, tuck your legs up under you and tear open a letter from afar, to see…

Question: Who is the best unicorn in the world ever?

Answer: Danny is. No one else is a better unicorn than him.

I guess this much is already apparent; I’ve never been much of a finisher. There are so many unfinished projects that remain abandoned to this day, and actually jotting down the whole lot would only make me feel like a huge fail. But I’ll do it anyway, because writing it down might drive me to carry on with my projects.
List of things unfinished to this day:
* Cross stitching – I started this cross stitch decoration since I was in Year 3 (so when I was around 8) and it’s still unfinished, crammed in the corner of the attic somewhere. I am now 19 and go to University.
* This blog – I promised myself that I’d carry on posting. Not daily, mind, but at least regularly. My last post was back in March. Well done you.
* Canvas – I was planning to paint something inspiring on it for ages. I have the idea in my head, I’ve bought the canvas, but that’s as far as I’ve gone.
* Loads of half-read books. I don’t want to count them.
* Song lyrics – I attempted to write a song, the foundations of the song lyrics are in my head, but argh! Just scribbled lines here and there.
*Story board – it was about stars who are actually alive, and fell in love with other distant stars in the galaxies.  Quite corny, really.  I started this when I was extremely young.
*And this post- I started this post 2 weeks ago, and I still haven’t finished it.  D:

What is wrong with me? >.<
It’s not even like I’m extremely busy. Funny thing about people though, when they have a lot to do, they get it done. But on days when you have nothing to do, your body doesn’t even want to move its fingers to type a few words in. And you have so much time, too.
Maybe I just need to be busier. That way, I’d finish off more projects of mine.

This is random, but I want to say, I did not know that I like folk songs. Well its folk-rock (says Wikipedia), but I was so adamant that I dislike folk songs, so I refused to listen to folk singers properly. I was wrong; I’m currently listening to Passenger and the lyrics are so deep and meaningful. If anyone even bothers to read my posts, and you appreciate beautiful lyrics, listen to Passenger. Especially their songs “All the little lights” and “Staring at the stars”. Or maybe it’s just me.

There is a song called “The Last Unicorn” by Passenger; the song ends with “for all we know the last unicorn is dead”. And I found the unicorn. That makes me feel very happy indeed.

Life can be beautiful.

Yes, it is true. I was peer-pressured into wearing a bra.

Peer pressure: social pressure by members of ones peer group to take certain actions, adopt certain values or otherwise conform in order to be accepted.

peer: a person of the same age, status.

Okay, let me rephrase! Lets say I’ve been pressured into wearing a bra (not the deletion in the word ‘peer’). Its pretty much just my mum who forced me into one. This is going to be hard to explain, because it means I must explain my younger-self.  So I used to get mad about being a girl and I used to feel that men get more respect. I hated (and still do) sexism against females, the way they are portrayed in the media,(some) men’s generalisation about women, the feeling of being put down from certain tasks because I am a woman. I used to make a right show of trying to explain to the world that I am fully capable –  as capable as a man. I could be a man! I would fight with boys; fist fighting, none of the itty-bitty bitch slaps. Yes, I am physically quite weak, but I wouldn’t stop. I hate cars but I would work on broken cars with my Dad, fix broken things around the home, and occasionally, even get rid of insects. Man, I even used to talk in a lower voice than my own; a habit which still kicks in sometimes, less frequent now though. I was a little mad. The young me was quite the radical feminist.  Ofcourse, the feeling has faded with time; more time spent with other girls helped. Boys became more interesting, I started to enjoy dressing up and talking over fighting.

Now lets talk about my Mum. She is an overly prepared woman and a bit too expectant. As I was a tall girl as a child, everyone ASSUMED that I’d gain “womanhood”early. My my, how wrong they were. (haha, if I recall correctly, I was one of the last five girls in my class to start my periods –  shout out to all the mothers who nosily asked my mum whether I started; Dont ASSUME!!). Anyway, so my Mum was always way too early to introduce me to new things, but knowing my crazy anger about being a girl, she just randomly surprised me with things she thought as essential, (it wasn’t, who needs hair-removing cream when they’re 10?!). I suppose the perk was that I never had to ask awkward questions. Not that I’d find any of it awkward, if the time came, I would have put it bluntly:

“Mum, my boobs hurt.Tthey’re growing and girls with boobs in school wear bras. Buy me one”
or
“There’s hair under my armpits. Help me take them out”

Like so.
It wasn’t necessary though because my Mum bought me my first bra when I was 10. The bra grossed me out SO much, I was MAD MAD MAD. I was FUMING! I threw it in the bin.
She fished it out, washed it, let it dry and then pressured me to try them out. I cried so much then, I hated bras.
Afterwards, upstairs in the sanctuary of my bedroom, I took my anger out on my own  bra – I remember biting on the bra, trying to hurt it. I’m playing the scene in my head and I’m cringing. I must have looked like such an idiot! If there was a peeping Tom peering in, he would have been frightened.
When I eventually needed to wear bras (when I was 14- my Mum was 4 years early. Too expectant, I tell you), I remember feeling uncomfortable, angry and irritated. That feeling too, with time, faded.

I now collect cute bras. I even got my Dad to ask someone in Japan to buy adorable bras for me ( my Dad goes abroad a lot). In Japan, the bras are absolutely KYOOTEE!! I cannot stress that enough.

Hahahaha, how things change. Okay, this is so weird.

And a great big thankyou to all those who have followed my blogs, it means a great deal to me. I could cry out of happiness, especially as writing is something I find extremely difficult. You are my motivation to keep blogging. I love you all even though i don’t know most of you, but if you did live close by, I would give you all the biggest hugs.

And thank you all, for reading my awkward rant.

I’ve been so ADDICTED to youtube these days after getting a Blackberry. The first thing i do every morning is grab my phone, roll up on the left side of bed and check out the subscriptions and youtube trends. Thats where i found this video called ‘My first harcore song’.

I honestly dont know what to make of that song, but it is addicting. I found myself singing it inside my head during my Chemistry exam today.
I just wish i could make shriek-y noises like her! (0:21)
And that thing she does with her hand/arm at 0:30- 0:33 seconds. ( i really liked what she did with her hand and her arms so much that ive watched it atleast 20 times)

The lyrics the hardcore song has is just as deep and profound as Rebecca Black’s friday song.
Do note, i am not hating on either of them, it is just a personal opinion.

What do you make of the song? (i hope the video comes up in my post- if it doesn’t then pardon me, i am a technology noob).

Thankyou for reading my nervous randomness.

First blog ever. And i am already annoyed.
I just wrote an extremely long post and it got lost. LOST I TELL YOU!

I am such a NOOB at this blogging malarky. And technology. Do you know how LONG it took me to understand how to navigate this website?
You can call that stupidity- but its actually noob-ity.

I was just reading the top blogs on wordpress and I already feel like a failure. There are so many talented writers who have already put me off. But this is the first time that i am going to try to stay motivated and carry on blogging. Because motivation is my weak point.

Just before i made my account on wordpress, I was speaking to a friend about the sort of things that you would write in a blog. And he asked if there were any topics that particulary interests me.
Well, no. Not really.
Then what do you plan to gain out of blogging?
Self satisfaction, i suppose.
The he replied saying that all i need is self motivation.

I have never completed anything completely in my life. Nor have i carried on with a particular hobby for more than a month.
So when  i promised everyone in my family that i am going to cook lunch on Saturday, everyone rolled their eyes.
I want to carry on something for a long period of time and so im going to take a huge FAT STAB at blogging. I would be the proudest human on the planet if i carried on blogging till I’m 80.

This is my new years resolution.

I have a couple more resolutions but this is my main one.

Thankyou for reading my nervous rant.